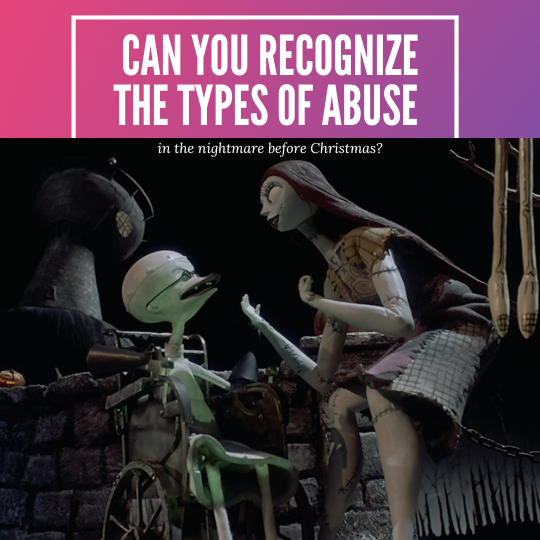 The Real Terror in the Nightmare Before Christmas is Abuse

Tim Burton’s the Nightmare Before Christmas is filled with ghouls, monsters, and gruesome representations of Halloween. However, one of the scariest elements of this movie is its depiction of abuse. The character Sally was literally created in a lab by Dr. Finkelstein, a mad scientist and resident of Halloween Town. While the exact nature of their relationship is unclear, Dr. Finkelstein exhibits numerous types of abuse throughout the movie.

**Gifs depicting the abuse are in this article, please do not read further if you might find it triggering**

In addition to calling Sally names such as “foolish oaf” and “wretched woman,” the doctor routinely utilizes guilt in an attempt to control Sally’s actions. When she tries to escape the abusive relationship, the doctor accuses Sally of not caring about him. “You want me to starve? An old man like me who hardly has strength as it is? Me? To whom you owe your very life?”

This type of language makes it exceedingly difficult to leave an abusive relationship because Dr. Finkelstein has tied his health and happiness to Sally’s presence in his life.

Status Abuse: Involves using any privilege or societal status as a reason to treat the person being abused as less than. It includes behaviors such as: treating someone like a servant, excluding someone from the decision-making process, and acting like a dictator.

Since the doctor physically created Sally, he feels a sense of entitlement to her. He is very controlling of her life and attempts to ban her from making her own choices. In fact, when Dr. Finkelstein discovered Sally had escaped to watch the parade in town, he told Sally that she “wasn’t ready” for that outing, a clear insinuation that he knew what was best for her.

Whenever Sally would assert her autonomy in a small way, Dr. Finkelstein would immediately reference his position of power by saying to Sally, “you’re mine, you know? I made you with my own hands.” This reinforces his status above Sally, likely causing her to feel indebted to the doctor and less likely to leave.

Within the first few minutes of the movie, Dr. Finkelstein exhibits his first act of physical abuse. When he attempts to force Sally to return home with him, she refuses and tries to escape. Upset by her refusal, he tugs on her arm until it falls off of her body. As the movie progresses, the abuse escalates and the doctor is seen both strapping Sally to an operating table with metal clamps and locking her in a room that resembles a jail cell.

A key element of the film revolves around Sally going to extreme measures to leave Dr. Finkelstein only to return to his lair a few scenes later. This is consistent with people experiencing domestic violence. According to the National Domestic Violence Hotline, without supportive services, a person experiencing abuse will attempt to leave 7 times before they are able to leave for good.

When Sally returns to the doctor after another attempt at leaving, he remarks to her that “you’ve come back.” Her response is “I had to” because he was in possession of something very valuable to her. She was literally unable to leave because she had nowhere to go and no support within the town.

After losing interest in Sally near the movie’s end, Dr. Finkelstein begins creating a new girl in his laboratory. His intention is still to control this woman and have her meet his every need. He even states, “you will be a decided improvement over that treacherous Sally.”

The depiction of this new woman, likely named Jewel, depicts the cycle of abuse. Because the doctor did not receive any abuse intervention counseling, he cannot see the error of his ways and repeats the same pattern. He’s literally designing a woman to fulfill all of his needs instead of concerning himself with her wants or desires.

While JBWS, a non-profit organization that assists people impacted by domestic violence, does not currently exist in Halloween Town, it could have provided Sally with numerous resources. She could have received safety planning and supportive counseling services to understand and navigate the abuse she was experiencing. The JBWS-led Morris Family Justice Center, could have provided Sally with legal advocacy services and assistance with filing a restraining order against Dr. Finkelstein. Housing concerns could have been alleviated for her by coming to Arbour House (JBWS’ Emergency Safe House) and helped her get back on her feet at the Carol G. Simon Transitional Living Resource Center (where the Transitional Living Program is located).

Additionally, Dr. Finkelstein could have gone to the JBWS-led Jersey Center for Non-Violence and enrolled in the Abuse Ceases Today (ACT) program to unlearn his abusive tendencies, develop healthy communication techniques, and uncover the root of his abusive behaviors.